Leading from the Middle

Leadership, leadership principles, and leadership key attributes have been debated for centuries.  Whether leaders are born, developed, self-proclaimed, or heirs to a throne, history has taught us that being an effective leader has nearly always been more about actions than titles or positions.

LtCol Erker’s military experience includes the F-35 Requirements Office and flying as a T-45 and F-35 Test Pilot.  He had command of the Navy’s Strike Aircraft Test Squadron, VX-23, in Patuxent River, Maryland.

"Leading from the Middle" is free to attend, compliments of P H Tyson & Associates

Can’t attend? The webinar will be available on-demand after the event for a small charge. 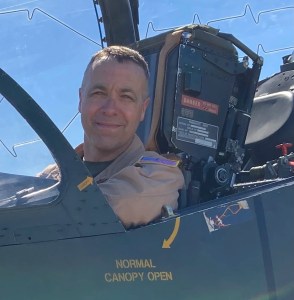 Buzz was born and raised in Grand Island, NY, a small town outside Buffalo.

Kevin graduated from Grand Island High School and attended the State University of New York at Buffalo (UB). Kevin graduated from UB with a Bachelor of Science in Aerospace Engineering and was commissioned as a 2nd Lieutenant in the United States Marine Corps. After Basic School, Kevin was assigned to Naval Aviation Schools Command in Pensacola, Florida, and commenced flight training. After completing flight school, Kevin earned his Naval Aviation Wings of Gold.

He was then selected to fly F/A-18 Hornets and joined VFA-106 for initial training in the jet. After VFA-106, Kevin was assigned as a F/A-18 pilot to VMFA-312 at Marine Corps Air Station Beaufort, SC. While with VMFA-312, he completed multiple combat deployments in support of Operations Iraqi and Enduring Freedoms (OIF, OEF). The first of these deployments was with Carrier Air Wing One (CAG-1) aboard the USS Enterprise. The second was as an Individual Augment (IA) in Iraq, training newly recruited Iraqi Air Force Pilots.

In 2005 Kevin was selected for the United States Naval Test Pilot School (USNTPS) Cooperative Education Program and moved to Wright Patterson Air Force Base to attend the Air Force Institute of Technology (AFIT). Kevin graduated from AFIT, earning a Master of Science in Aerospace Engineering. Then he attended USNTPS and graduated from the Engineering Test Pilot course. Kevin completed his first tour as a Test Pilot at VX-23, serving as a F/A-18 and T-45 Test Pilot in 2010.

In 2011 Kevin became an acquisitions officer, subsequently serving in PMA-281 and then at Headquarters, United States Marine Corps Aviation Plans and Policy on the F-35 Transition Team. In 2013 Kevin was selected to command VX-23, Navy Strike Test and Evaluation. VX-23 operated over 50 aircraft (F/A-18, T-45, F-35, EA-6B, X-47) and comprised over 900 government and contractor civilians, Navy, Marine, and Royal Air Force/Navy pilots. After command, in 2016, Kevin moved to Edwards Air Force Base, CA, and served as the Naval Aviation F-35 Operational Test Director.

Kevin retired from Active Duty in 2018 after 22 years of service. Over his career, Kevin completed multiple combat deployments and accumulated over 2000 hours of flight time in over 30 different aircraft. He and his wife of 25 years, Erinn Erker, reside in Heber City, Utah, with their three children, Owen (19), Grace (17), and Ethan (16). Kevin now owns Elevate Test Solutions, a small consulting company, and works part-time for The Squadron.

Click here for additional training and webinars from PH Tyson

Leading from the Middle